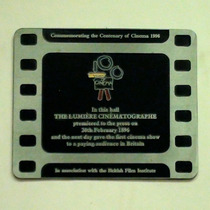 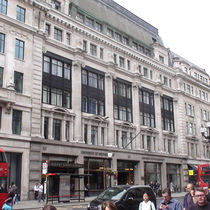 Commemorating the Centenary of Cinema 1996
In this hall the Lumière Cinématographe premiered to the press on 20th February 1896 and the next day gave the first cinema show to a paying audience in Britain.

The Lumières' friend, Felicien Trewey, a French music hall entertainer already popular in London, brought the Lumière Cinématographe machine to the hall at Regent Street Polytechnic for a 3-week booking, charging 1 shilling a ticket. A timeline for this cinema is give at Birthplace of Cinema. We've also heard that in 1951 this was the first cinema to show an X rated film.

2015: Londonist reports that the cinema has been restored and reopened as a cinema.

Formerly The (Regent Street) Polytechnic. The plaque for the first cinema is inside the hall and is not normally accessible except when the hall is in use. The other two plaques are on the Regent Street facade.  The University's Archive Services have produced a number of useful research guides for their different sites and facilities.

This section lists the subjects commemorated on the memorial on this page:
Regent Street - first cinema in Britain

This section lists the other memorials at the same location as the memorial on this page:
Regent Street - first cinema in Britain

Barking AbbeyWas founded by St Erkenwald in the year 666. Destroyed by the Da...

Unveiled on the same day as the Nissel plaque. We learnt something typing th...