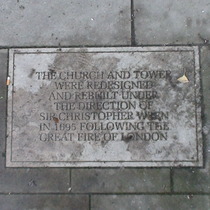 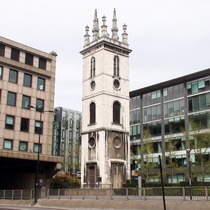 The church and tower were redesigned and rebuilt under the direction of Sir Christopher Wren in 1695 following the Great Fire of London.

This section lists the subjects commemorated on the memorial on this page:
St Mary Somerset - Wren

This section lists the other memorials at the same location as the memorial on this page:
St Mary Somerset - Wren

Wikipedia explains: "According to John Stow, in 1370, the Brabant weaver comm...

'Sesquicentenary' is such a great word - it's not even in the Microsoft dicti...

The Manor House, built 1845 for John Robert Daniel Tyssen, steward for the Ha...

The "A"s are certainly the anarchists' 'A' symbol but we don't understand wha...