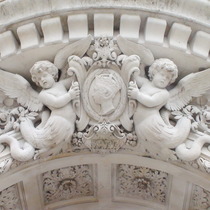 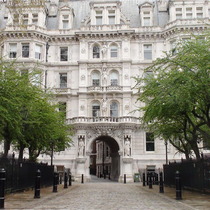 This 1878-9 building by E. M. Barry was hidden behind scaffolding when we visited in November 2013 but by April 2014 it was showing its newly cleaned and restored highly decorative south face. The sculptural work is all by Calder Marshall, and includes: two figures either side of the archway representing Learning and Justice; a central atlas and two caryatides (male and female figures supporting the masonry) one above the other on the first, second and third floors.  The cartouche with the Queen's profile is held by two cherubic merchildren.  Much more information given in the magnificent 'Public Sculpture of the City of London' by Philip Ward-Jackson.

Victoria, not surprisingly, had an on-going relationship with the Temple and the City, Her first visit to the City in 1837 is featured on the Temple Bar.

This section lists the subjects commemorated on the memorial on this page:
Queen Victoria at Middle Temple Lane

This section lists the subjects who helped to create/erect the memorial on this page:
Queen Victoria at Middle Temple Lane