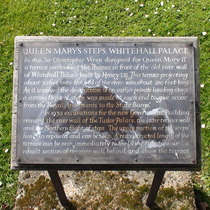 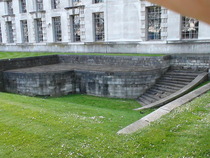 Queen Mary’s Steps, Whitehall Palace
In 1691, Sir Christopher Wren designed for Queen Mary II a terrace overlooking the Thames in front of the old river wall of Whitehall Palace built by Henry VIII.  This terrace, projecting about 70 feet into the bed of the river, was about 280 feet long.  As it involved the destruction of an earlier private landing stage a curving flight of steps was made at each end to give access from the Royal Apartments to the State Barge.

In 1939 excavations for the new Government Building revealed the river wall of the Tudor Palace, the later terrace wall and the Northern flight of steps.  The upper portion of the steps has been repaired and can be seen.  A reconstructed length of the terrace can be seen immediately to the left of the steps and a rebuilt section of the river wall behind and above the terrace.

A nearby information board gives a good history of the Embankment:

The first person to suggest a river embankment was Sir Christopher Wren after the fire of London in 1666.  Work eventually began in 1864, despite opposition from commercial interests, notably the wharfingers.  It was carried out under the control of the Metropolitan Board of Works’ chief engineer, Sir Joseph Bazalgette (1819 -1891), a memorial to whom can be found on the wall of the Embankment.  The Embankment was built not just to ease traffic congestion and beautify the river, but to house the main sewer.  This stopped the other sewers flowing directly into the Thames.  Obviously it was easier to build here than under the Strand.  At the same time the Metropolitan District Railway was able to build another link in the Circle Line.  The embankment was of sound construction and faced with granite.  On 13 July 1870 the Embankment was opened by the Prince of Wales.  A further improvement was made in 1874 when Northumberland Avenue was built as the main approach road to the new embankment.  It necessitated the demolition of Northumberland House.

The total area reclaimed was 37¼ acres.  The road was lined with plane trees and about 20 acres laid out as gardens, designed by Alexander McKenzie so as to avoid “expensive gardening”.  The subsoil came from the building of the Metropolitan District Railway and the topsoil form Barking Creek.  The design of the main, Villiers Street, section of the gardens was much as it is today, with paths and a large number of flower beds.  Deciduous trees and shrubs were chosen because of the beauty of their spring and summer foliage, and because they were more likely to withstand the “injurious effect of the smoke-laden atmosphere”.  They also had to withstand Victorian vandalism; many had to be replaced before they could gain their full stature.  The design of mounds, winding paths and flower borders to shrubberies was criticised in the architectural press as being too rural. A central avenue of trees with only one large terracotta pot of flowers was suggested as more appropriate.  The original designs had a fountain at the west end of the present central flower beds.  A temporary wooden bandstand was put up in this space.  In 1953 a permanent bandstand and seating area was constructed over a semi-circle of the flower beds.  In the 1970s the regular lunch-time concerts were popular with office workers.

Temple Gardens, to the east of Temple Underground Station, were originally a narrow strip intersected by a tar-paved path bordered by ivy and flower beds.  In 1895 they were altered to incorporate a bandstand.  Band concerts on weekday lunch-hours were frequented by workers from the printing houses and originally paid for by subscriptions from the press.  The site is now a central rosebed.

The Whitehall section of the gardens was the last to be laid out after a dispute with the Office of Woods and Forests who administered Crown lands.  Mr W. H. Smith MP campaigned in Parliament for it to be a public garden and had the pleasure of formally opening it in 1875.  The flower beds were grouped round three statues, much as they are now. {2013: there are very few flowers in the Whitehall section.}

This section lists the subjects commemorated on the memorial on this page:
Queen Mary's steps

The palace covered the area approximately bounded by (clockwise) Northumberla...

We could find no plaque or information board explaining this very unusual con...

{On a nearby modern plaque:}The Devonshire Coat-of-ArmsRemoved from the porti...