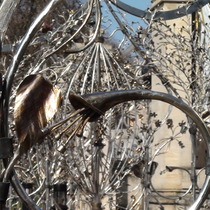 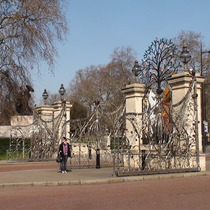 {Inscribed into the stone below the lion and unicorn, on both sides, east and west:}
Queen Elizabeth Gate 1993

Wynne was the artist for the central, cartoony, lion and unicorn screen. Lund was the designer of the rather lovely forged stainless steel and bronze work : 6 gates, railings and lamps.

Opened by the Queen in celebration of her mother's 90th birthday (only 3 years late), these gates were not received with unalloyed praise. The Telegraph reports: "Lord Rogers, the architect, described the design ... as 'romantic candyfloss" and compared it to one of Queen Elizabeth's hats. Even her grandson Viscount Linley said he 'absolutely loathed' it." The same article reports an application to have the gates listed.

This section lists the subjects commemorated on the memorial on this page:
Queen Elizabeth Gate

This section lists the subjects who helped to create/erect the memorial on this page:
Queen Elizabeth Gate

Sculptor of figures, animals, and portraits. Born London. Other work in Londo...

Since they are rather lovely we chose to photo one of the gate-post sculpted ...