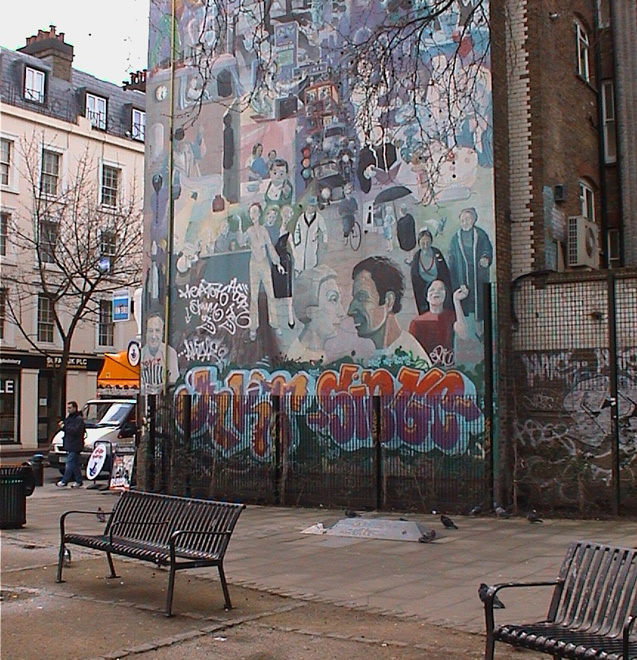 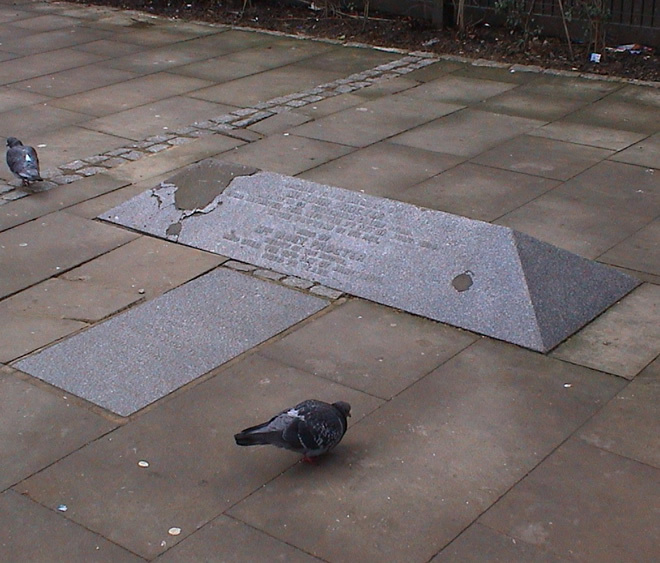 {In front of the "stretched" pyramid there is a stone laid flat in the ground, on which is written:}
This piece of land, being fifty-seven feet long and eighteen feet wide, was dedicated as an open space for the use of the public for ever. In memory of Robert Procter and Esther Procter, his wife, of 78 St Pauls Churchyard, by their four children.

We were contacted by the people at London Street Views who are researching the Street Views of 1838 - 47, produced by John Tallis. They have done some in depth research covering the people on these two stones and say, in summary “that the Todds and Procters became one large cheesemongering family with several shops in London”. On their page you can see Tallis’s drawings of the two addresses mentioned on the memorials.

This prompted us to do a bit more research ourselves: from at least 1799 to at least 1915 this west-most section of Tottenham Street, where the open space is, was Chapel Street and built up for its whole length. We've always thought that the stretched pyramid was a grave monument (having seen others similar), possibly from a graveyard beside the Whitefield Chapel (still there but in a new incarnation) just to the north of the open space. However the grave pyramid’s current location would put it in the garden of one of the houses so it must have been moved at some point. Wikipedia provides the information that in 1945 the church was destroyed by the last V2 rocket to fall on London.

That explains the distinctly post-war looking church building and we guess that the houses were also damaged/destroyed by wartime bombs, though probably not by the same bomb since the intervening Caffe Nero building at number 79 has survived. From the dates provided by London Street Views the open space must have been created after 1930. So we guess it was after the bombing which would also explain the rather unusual relocation of the burial monument. The site would have included about 3 houses in Tottenham Street plus 2 houses in Tottenham Court Road. For the children to have given this space, they must have owned it, most likely inherited from their longest surviving, but recently deceased, parent, Robert or Esther, we don't know which. Quite a valuable inheritance and, even bomb-damaged, a generous gift.

It is odd that people own the land on which their ancestors are buried, other than a small family burial plot. Perhaps the grave was in the nearby graveyard and the family chose to have it moved onto the land which they were giving to the public.

The good people at London Street Views have found burial records for all three Procters mentioned on the pyramid in the family grave in the Whitefield Chapel burial ground, which confirms our theory.

One other observation, prompted by the family tree presented on the London Street Views site: on the grave pyramid there is a John (d. 1836), grandson of John (d. 1834) and Mary. The family tree shows no John that could be this grandson. Babies that died so young, as many did at that time, would not leave much of a paper trail for us to follow.

2014: at UCL - Urban Geology in London No.2 we found this text: "Whitefield’s Tabernacle (1756) ... once the largest nonconformist church in the world .... was known colloquially as ‘Whitefield’s Soultrap’ Whitefield was as famous as John Wesley in his day and ... Reverend Augustus Toplady ... the composer of Rock of Ages was buried here." This UCL document is worth a browse - it shows London from, what is to us, a very unusual perspective.

2019: Planetslade have a thorough and well-written history of the Whitefield chapel and its burial grounds. In brief: Funded by his patron the Countess of Huntingdon (see Lady Erskine for more about her) in 1760 George Whitefield built his Tabernacle here, with burial grounds to north and south. The Anglican church refused to consecrate this ground so after Whitefield’s death in 1770 his successor, Rev. Joss, took an unusual approach. A church next to the Bank of England was being demolished to allow an extension, so Joss arranged for “several cartloads” of earth to be transported from that consecrated churchyard to Tottenham Court Road. Later, when the status of the land became relevant, the Anglicans, not surprisingly, pointed out that that’s not the way it works.

The lease ran out in 1827 which caused the chapel some problems but by about 1860 the chapel bought its own site plus the burial ground to the south. However that to the north was sold to an unscrupulous businessman, Nathan Jacobson. He bought the land expecting to be able to develop it, but removing coffins and bodies was not a straightforward task and he repeatedly failed to do it in a manner the law found acceptable. He died intestate in 1881 and while the ownership of the land was disputed it was lease by a fairground operator who moved noisy machinery onto the site in 1887. The disruption this caused to the services in the Tabernacle led to complaints and legal proceedings that lasted until about 1890, when finally the LCC bought the land and landscaped it into a public garden with playground. The southern burial ground was treated in a similar fashion at about the same time.

In WW2 the Tabernacle was used as a hostel and a deep level bomb shelter was built in the east section of the old northern burial ground. 25 March 1945 a V2 bombs destroyed the Tabernacle and 5 houses directly south on Tottenham Court Road and the old Chapel Street, but left the, now, Café Nero relatively intact.

Planetslade describe the stretched pyramid as if it was created at the time that the Procters donated the land, but we are certain it was originally the grave marker and that it was moved here at the time of the donation.

This section lists the subjects commemorated on the memorial on this page:
Procter family

This section lists the subjects who helped to create/erect the memorial on this page:
Procter family

four children of the Procters

The four children of Esther and Robert Procter. 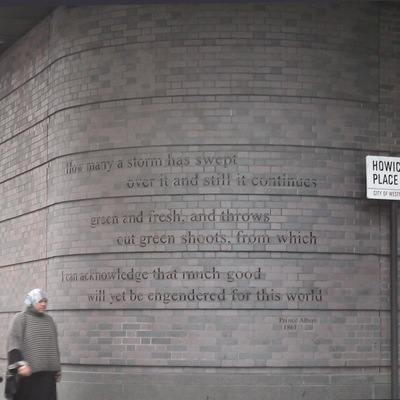 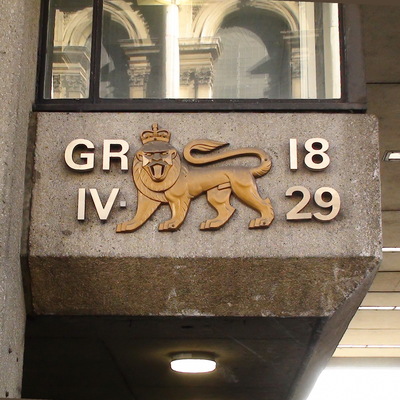 The college was founded by King George IV in 1829. 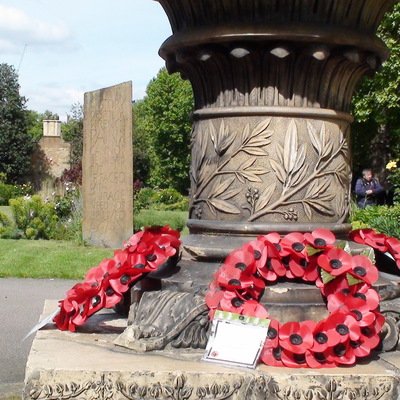 On a nearby information board: "Tinworth Fountain - This was once a large ornamental fountain that stood in a panelled garden close to to... 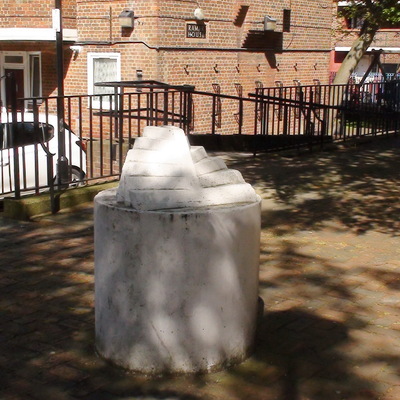 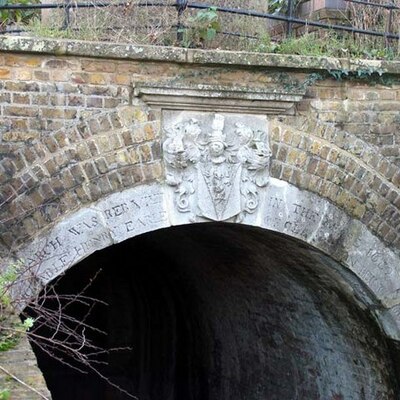 We are indebted to John Salmon at Geograph for his photo of this arch. The Portland keystone depicts Sir Hugh Myddelton’s coat of arms.