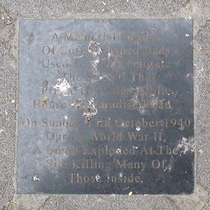 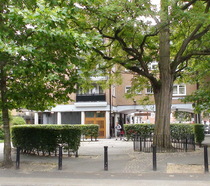 A memorial garden of coffin-shaped beds used to commemorate the site of the Prince of Wales public house on Paradise Road. On Sunday 13th October 1940 during World War II, a bomb exploded at the site killing many of those inside.

We think this plaque was installed c.2012, to replace the lost one. We are puzzled by the reference to "coffin-shaped beds". Flowerbeds, presumably but even so, a bit morbid. There is no sign of these any more so we wonder what the garden used to look like and when it was relaid.

This section lists the subjects commemorated on the memorial on this page:
Prince of Wales WW2 bomb

This section lists the other memorials at the same location as the memorial on this page:
Prince of Wales WW2 bomb

The MOBO Awards (Music of Black Origin) was established in 1996. Ms Dynamite ...

The plaque was unveiled by actor and president of the Heritage Foundation, Vi...