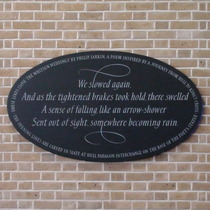 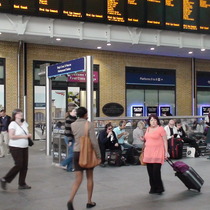 We slowed again.
And as the tightened brakes took hold there swelled
A sense of falling, like an arrow-shower
Sent out of sight, somewhere becoming rain.
{Around the edge:}
These lines close The Whitsun Weddings by Philip Larkin, a poem inspired by a journey from Hull to King's Cross.
The opening lines are carved in slate at Hull Paragon Interchange on the base of the poet's statue there.

The Whitsun Weddings (recalling a train journey on Whitsun Saturday afternoon in 1955) was voted one of the "Nation's Top 100 Poems" in 1995. The unveiling of a statue in Hull was the culmination of a festival mainly based in Hull, marking the 25th anniversary of his death. We read at the time that a statue was planned for King's Cross but, so far, all we have is this plaque.

This section lists the subjects commemorated on the memorial on this page:
Philip Larkin

This building was partly destroyed by German aircraft on the 18th December 19...