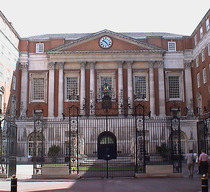 Plaque: Opening of the BMA house

This house of the British Medical Association was opened by His Majesty King George V.
The Memorial Gates were dedicated by Randall Davidson, Archbishop of Canterbury.
July 13th 1925.

This inscription is on the inside of the west face of the courtyard, to the left of the archway. On the right there is another inscription recognising the services rendered by the Building Committee (1922 - 1929), which we decided not to transcribe. It gives Lutyens as the architect of the Great Court and C. Wontner Smith of the Front Court.
The Queen also attended the opening ceremony at which Lutyens presented the keys of the memorial gates to the King who then unlocked the gates.

The BMA courtyard is not accessible to the public but one can see the fountain, the memorial gates and the clock by peering through the first set of gates. Lutyens was commissioned by the Theosophical Society to design the building, completed in 1925, which is now BMA House. The unfinished site was bought by the BMA who commissioned Lutyens to finish it. They then commissioned another architect for the buildings that front Tavistock Square.

This section lists the subjects commemorated on the memorial on this page:
Opening of the BMA house

Opening of the BMA building

This section lists the subjects who helped to create/erect the memorial on this page:
Opening of the BMA house

This section lists the other memorials at the same location as the memorial on this page:
Opening of the BMA house

London Temperance Hospital. This foundation stone of the new wing was laid in...