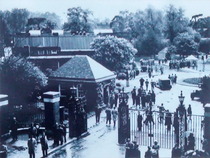 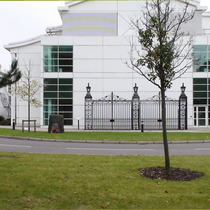 {Incorporated into the decorative iron-work:}
NPL

A nearby information board provides: "Following site redevelopment these splendid gates, from the original National Physical Laboratory (NPL) entrance off Queens Road, were refurbished and moved to their current location as an ornamental feature and to preserve them for posterity.

The gates were first erected at Queens Road in 1925 after completion of the new roads Rayleigh Avenue and Kelvin Avenue within NPL.  The 'new' entrance to NPL was formally opened on 23 June 1925 by the President of the Royal Society, Sir Charles Sherrington, OM on the occasion of the annual visit of the General Board.  Lord Rayleigh also took part in the ceremony and spoke of his father's long connection with NPL as Chairman of the Executive Committee for twenty years.  Many other luminaries were present, including Sir Lionel Earle (Permanent Secretary of His Majesty's Office of Works), Sir H. Frank Heath (Secretary of the Department of Scientific and Industrial Research), Sir William McCormick (Chairman of the NPL Advisory Council), Sir Arthur Schuster (Chairman of the NPL Executive Committee), Sir Richard Glazebrook (first Director of NPL), and Sir Joseph Petavel (NPL Director at the time) and the ceremony attracted a sizable crowd of local residents.

The gates were refurbished in 2008 by Welding Mobility in West Drayton."

The board also provides two photos of the gates in their original location, which we have used on this page (NPL Open Day in 1948 showing visitors entering through the Queens Road gates) and on the National Physical Laboratory page.

We would have preferred a shorter list of bigwigs at the original installation and more information, such as:  where exactly were the gates before they got moved here?  And were they erected as a WW1 memorial?   Using the photos we believe we have the answer to the first question: on the south west of Queens Road at the junction with Bullard Road.  Gates were sometimes used as war memorials, e.g. at Highgate School and 1925 is certainly the right time.

This section lists the subjects commemorated on the memorial on this page:
NPL gates

The NPL's history page concentrates on their work (e.g. they weighed Concorde...

This section lists the other memorials at the same location as the memorial on this page:
NPL gates

The National Archive BIS War Memorials has research about all the names on th...

This small plaque is on the inner gate pier to the left of our photo. From Lo...