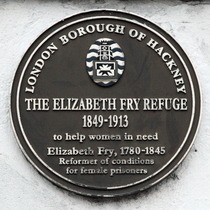 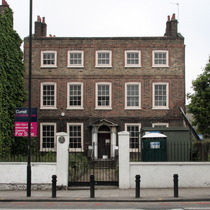 The Hackney Society has done a thorough job researching the history of this building, with lots of pictures.   A brief summary:  Built about 1699.  Possibly home to a clock-maker (someone has a clock, with "C. E. Carter 195 Mare St Hackney" on its face).  1849-1913 Elizabeth Fry Refuge.  We believe Fry had no connection with this building: she had recently died so they named it in her honour.  In 1913 the house became The Lansdowne Liberal and Radical Club, later The New Lansdowne Club). Described as a bustling working mens' club from the 1950s - 1970s. Club closed in 2004, when planning permission was received for a  Vietnamese Community Centre.  This never happened.  Bought by Dunbar Bank. Has a reputation as a drug den but the squatters in occupation in 2009-10 were looking after it and holding community events such as bicycle workshops.

This section lists the subjects commemorated on the memorial on this page:
New Lansdowne Club

Otherwise known as the Elizabeth Fry Institute for Reformation of Women Priso...

Prison reformer.  Born as Elizabeth Gurney in Norwich into a Quaker banking f...

15 August is the official VJ Day in the UK so erecting this plaque on Wednesd...