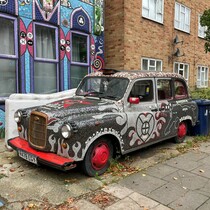 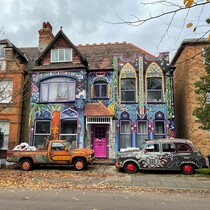 This house is/was the home of artist Carrie Reichardt. Across the top of the first floor bay window: "I'm an artist, your rules don't apply".

The back wall of the house and its garden, on Cunnington Street, is equally worth a visit. The whole artwork, started by Carrie Reichardt and her partner at the time, Thayen Rich, came together over a 20 year period. From 2008 you can watch it develop on Google Streetview. Inspiring City is a very good introduction to the details of the artwork. In the absence of any other information we have ascribed all the art work to Reichardt, but understand that many artists have been involved.

One would expect the neighbours to be, at the least, equivocal about the artwork that landed in their midst but the front garden wall of the house immediately opposite has a skirting board of mosaic in a similar style as that on the house, depicting a child-friendly scene. We take this to indicate some approval, which is confirmed by the video at Reichardt's website.

This section lists the subjects commemorated on the memorial on this page:
Mosaic House, front - Kenny Whitmore taxi

This section lists the subjects who helped to create/erect the memorial on this page:
Mosaic House, front - Kenny Whitmore taxi

This section lists the other memorials at the same location as the memorial on this page:
Mosaic House, front - Kenny Whitmore taxi

This is smaller than most plaques and made to look like it has been stamped i...

This project became known as the Treatment Rooms after a sign which came from...

As our detail picture we have this most unlikely-looking crocodile, grinning ...

Memorial Clock to Harold Wilson (not the Prime Minister.)