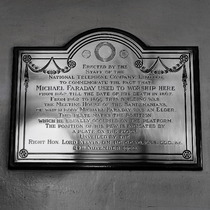 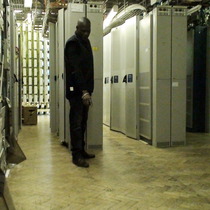 Erected by the staff of the National Telephone Company Limited to commemorate the fact that Michael Faraday used to worship here from 1862 till the date of his death in 1867.  From 1862 to 1899 this building was the Meeting House of the Sandemanians, of which body Michael Faraday was an Elder.  This plate marks the position which he usually occupied on the platform.  The position of his pew is indicated by a plate on the floor.

This plaque was first erected in the Sandemanian Chapel, at the same time, 1906, as the "MF" one. It was removed and put on display in the Royal Institution's reception area above, appropriately, a public pay-phone. When this phone was taken away the plaque was moved into the RI's object store and that is where we believe it still is. The photo of the plaque is courtesy of the BT archive (finding number: TCB 417/E 9368) and its catalogue entry tells us "North Exchange, Faraday. 17 May 1935". So the photo shows the plaque in its original location and we guess was taken at the time that the plaque was removed to the RI. We have cropped the picture but the original gives no more clues about the exact location in the ex-chapel.

We heard that there was a plaque on the Sandemanian Chapel where Michael Faraday was an Elder. We could see nothing on the outside of the building which has been converted into a BT telephone exchange. So we contacted BT, and Keith Lovell of their Connected Earth very kindly arranged a visit for us. On the day Pagget Lewis (helpfully pointing in our picture) and some of his colleagues were extremely helpful and located the floor plaque for us, and confirmed that there is supposed to be another, more substantial plaque, on the wall marking the location of the preaching platform, and unveiled by Lord Kelvin. Given all the electrical equipment installed there are strict H&S rules in place and it is not easy to examine all the wall space. So, in summary, we are delighted to have captured this plaque but disappointed not to have the other one.

And then: Via Facebook Comments Peter Berthoud of Discovering London told us that the other plaque is now in the Royal Institution's collection. It used to be mounted above a public telephone in their Albermarle Street reception area. When this pay-phone was removed the plaque was moved into the object store. We thought that was the end of the story but then we were contacted by John Chenery of BT telling us that BT's online digital archive had a photo of the plaque (www.bt.com/btdigitalarchives/ finding number: TCB 417/E 9368) and we use that image courtesy of BT Archives. Wonderful - thanks to everyone who assisted in this hunt.

This section lists the subjects commemorated on the memorial on this page:
Michael Faraday - N7 - plaque

This section lists the subjects who helped to create/erect the memorial on this page:
Michael Faraday - N7 - plaque

The General Post Office moved from Bishopsgate Street to a building in Abchur...

This section lists the other memorials at the same location as the memorial on this page:
Michael Faraday - N7 - plaque

The foundation stone of this building was laid 19th October 1926 by the Rt Ho...

This plaque is on the low boundary wall, facing the pavement. The railings, p...