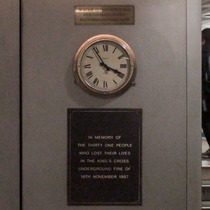 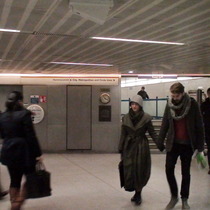 {On the upper plaque:}
This clock has been given in memory of those who lost their lives in the fire at King's Cross station on 18th November 1987.  From all the underground staff at sub-surface & tube stations.

{On the lower plaque:}
In memory of the thirty one people who lost their lives in the King's Cross underground fire of 18th November 1987.

When we first spotted this memorial, in November 2004, there was just the plaque, no clock. By January 2007 the whole station had undergone a major refurbishment and the clock was added. By November 2012 the upper plaque had appeared. Contrary to information from staff the clock is not stopped at the time of the fire but tells the correct time.

Coming up the escalators from the Northern, Piccadilly and Victoria lines this memorial is on the left hand side before the ticket barriers.

This section lists the subjects commemorated on the memorial on this page:
King's Cross fire - clock

This section lists the subjects who helped to create/erect the memorial on this page:
King's Cross fire - clock

We are grateful to Rambissoon’s daughter, Meera, who told us that her father ...

An information board in the garden tells us about a memorial but we can't fin...