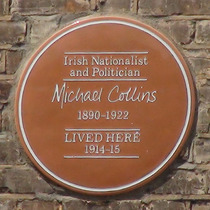 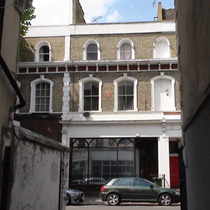 Collins lived in West London with his elder sister Johanna, 'Hannie', for 9 and a half years. They were at this address (convenient for her job at the Post Office Savings Bank at the huge Blythe House, just down the road) from 1914 - 1916 when he, at least, moved to Dublin. It was during this time that he became a committed republican rebel.

March 2016: Someone on Facebook says the plaque has been taken down. Google Street View shows it still in situ July 2014.

November 2016: Adriana Moura says it's still there. We checked using Google Street View history and it appears consistently all the back to 2008.

July 2017: Joe Harkin reports it still in place. Let's stop worrying about it.

This section lists the subjects commemorated on the memorial on this page:
Michael Collins

This section lists the subjects who helped to create/erect the memorial on this page:
Michael Collins

We've found a number of plaques in a similar and distinctive style around the...