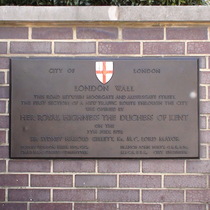 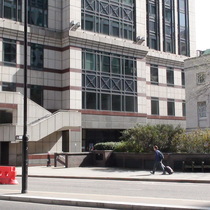 Should we collect this type of memorial? Too dull? Duller than this one: North South route in Haringey? In a world where The Boring Talks can achieve success perhaps we should create a page of Boring Memorials.

Actually we don't see plaques to roads very often so its rarity makes this one a little interesting. In 1959 the City was still recovering from war-time bomb damage so was proud to complete a new section of road. Many would say that the City was also causing a similar amount of damage to itself - by building horrible new roads.

In our photo you can see the plaque on the low brick wall.

This section lists the subjects commemorated on the memorial on this page:
London Wall road

Runs from Aldersgate Street to Old Broad Street and for most of that length i...

This section lists the subjects who helped to create/erect the memorial on this page:
London Wall road

{Below an image of a Victoria Cross medal:}Second Lieutenant William Rhodes-M...