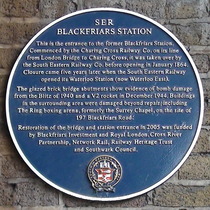 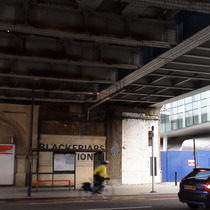 SER Blackfriars Station
This is the entrance to the former Blackfriars Station. Commenced by the Charing Cross Railway Co. on its line from London Bridge to Charing Cross, it was taken over by the South Eastern Railway Co. before opening in January 1864. Closure came five years later when the South Eastern Railway opened its Waterloo Station (now Waterloo East).

The glazed brick bridge abutments show evidence of bomb damage from the Blitz of 1940 and a V2 rocket in December 1944. Buildings in the surrounding area were damaged beyond repair, including The Ring boxing arena, formerly the Surrey Chapel, on the site of 197 Blackfriars Road.

Restoration of the bridge and station entrance in 2005 was funded by Blackfriars Investment and Royal London, Cross River Partnership, Network Rail, Railway Heritage Trust and Southwark Council.
{The emblem is that of the SER.}

You can see part of the old entrance to the left of our picture. To the right is Palastra House, the site of The Ring.

This section lists the subjects commemorated on the memorial on this page:
First Blackfriars Station

This section lists the subjects who helped to create/erect the memorial on this page:
First Blackfriars Station

This plaque was dedicated in the Silver Jubilee Year of Her Reign.  To Her Ma...