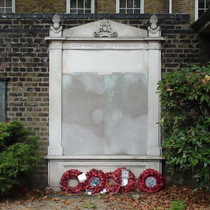 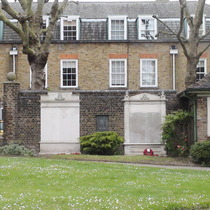 At the top, below the badge for the City of London Artillery:}
Their name liveth for evermore

{Above the list of names:}
To the memory of the officers, warrant officers, non-commissioned officers and men of the 7th London Brigade RFA TF who gave up their lives in the service of their country in the Great War, 1914 – 1918.
{In a list of 4 columns, 142 names. See the Subjects commemorated on the page for the bronze plaque.}

On this wall are attached 3 memorials: two large stone panels (one for each world war, with WW2 on the left) flanking a bronze plaque which is the London Troops War Memorial, in plaque form. The unveiling details given on the bronze plaque are identical to those on the full-size memorial.

This section lists the subjects commemorated on the memorial on this page:
London Troops - Fulham - WW1

This section lists the other memorials at the same location as the memorial on this page:
London Troops - Fulham - WW1

Bow Fair FieldSite of the annual Whitsun fair stopped in 1823 due to rowdyism...

The Vaughan LibraryDesigned by Sir George Gilbert Scott, this library was bui...

The Association of Women Pharmacists held its inaugural meeting here on 17 Oc...