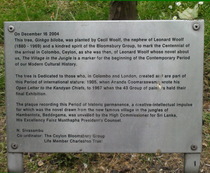 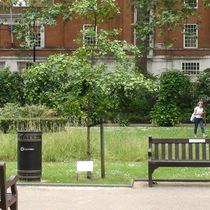 On December 16 2004 this tree, Ginkgo biloba, was planted by Cecil Woolf, the nephew of Leonard Woolf (1880 – 1969) and a kindred spirit of the Bloomsbury Group, to mark the Centennial of the arrival in Colombo, Ceylon, as she was then, of Leonard Woolf whose novel about us, The Village in the Jungle is a marker for the beginning of the Contemporary Period of our Modern Cultural History.

The tree is Dedicated to those who, in Colombo and London, created and are part of this Period of international stature: 1905, when Ananda Coomaraswamy wrote his open Letter to the Kandyan Chiefs, to 1967 when the 43 Group of painters held their final Exhibition.

The plaque recording this Period of historic permanence, a creative-intellectual impulse for which was the novel drawn from the now famous village in the jungles of Hambantota, Beddagama, was unveiled by the High Commissioner for Sri Lanka, His Excellency Faisz Musthapha President’s Counsel.

We have not followed all the various Sri Lankan lines of research opened up by the rather exotic text on this plaque. The importance of Leonard Woolf's first novel, both for Western literature and in Sri Lanka, was new to us.

This section lists the subjects commemorated on the memorial on this page:
Leonard Woolf's Ceylon

This section lists the subjects who helped to create/erect the memorial on this page:
Leonard Woolf's Ceylon

In loving memory of Mabel Healey.