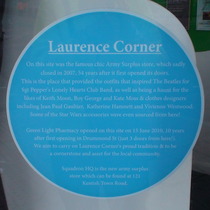 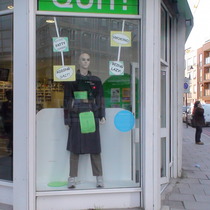 Laurence Corner
On this site was the famous chic Army Surplus store, which sadly closed in 2007, 54 years after it first opened its doors.   This is the place that provided the outfits that inspired The Beatles for Sgt Pepper’s Lonely Hearts Club Band, as well as being a haunt for the likes of Keith Moon, Boy George and Kate Moss & clothes designers including Jean Paul Gaultier, Katherine Hammett and Vivienne Westwood.   Some of the Star Wars accessories were even sourced from here!

Green Light Pharmacy opened on this site on 15 June 2010, 10 years after first opening in Drummond St (just 3 doors from here!).   We aim to carry on Laurence Corner’s proud tradition & to be a cornerstone and asset for the local community.

Squadron HG is the new army surplus store which can be found at 121 Kentish Town Road.

This section lists the subjects commemorated on the memorial on this page:
Laurence Corner Army Surplus

This section lists the subjects who helped to create/erect the memorial on this page:
Laurence Corner Army Surplus

The Corporation of the City of London Site of St John Zachary. Destroyed in t...