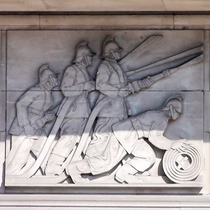 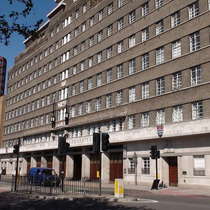 Opened by His Majesty King George VI accompanied by Her Majesty the Queen, 21st July 1937.

This building, by Higgs and Hill, is basically a rather massive office block but it has some lovely carved reliefs of firemen doing what firemen do, by Gilbert Bayes. So we have photographed one of these rather than the dull foundation stone.

This map shows the whole area occupied by potteries, mainly Doultons, but with James Stiff pottery on this site. By the start of the 20th century social tastes had changed and production was much reduced. In 1913 the firm was sold out to Doultons, who also were retracting. By 1918 it seems that at least part of the site had been taken over by other businesses because they are reported as having had a a fire on 30 January that year. LFB reports the "greatest single loss of London firefighters during peacetime" (although WW1 was still being fought, so we think this meant: not caused by enemy action). Seven firefighters lost their lives due to the fire "in a three-storey warehouse" "used as Pepper Mills" and "used as cattle food manufacturers".

We don't know what then happened to the site but in 1937 the HQ of the London Fire Brigade, this block, was built here. The LFB website calls this coincidental and that is probably correct but it's still interesting.

An image of one of the lovely reliefs on this building is used under the opening credits of the 1943 Humphrey Jennings documentary film 'Fires Were Started'. Actually, we were watching 'I Was a Fireman', Jennings's first cut of the film which ran to 74 minutes and was shortened to 63 minutes for release, but that probably makes no difference to this credit sequence.

This section lists the subjects commemorated on the memorial on this page:
London Fire Brigade HQ

This section lists the subjects who helped to create/erect the memorial on this page:
London Fire Brigade HQ