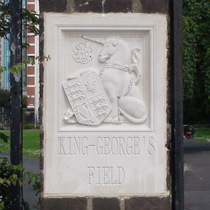 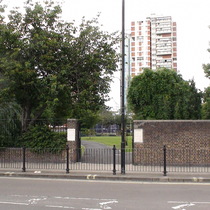 The plaques are on the gate piers, facing the road, unicorn on the left, lion on the right.

King George’s Field is a memorial to King George V (1865 – 1936) in the heart of the Docklands, and one of only two such sites in Southwark.
The park grew in three stages. In 1938, Bermondsey Borough Council used a grant of £500 from the King George’s Fields Foundation to convert a piece of land close to All Saints Church into a simple, hard-surfaced recreation area for children. This was a small but popular addition to the church’s existing public garden, which had seats and formal bedding set around pathways in a pleasing oval shape.
During the Second Word War the church was badly bomb damaged, and, in 1950, a strip of land to the east of the churchyard extended King George’s Field further, alongside what is now Surrey Quays Road. Around 1960, most probably as part of the wider Canada Estate Housing Scheme, the park was enlarged when All Saints Church and Vicarage were finally demolished. The churchyard gardens were cleared, the pathways reshaped and a new main entrance was located on Lower Road.
Today, the only surviving remnants of All Saints Church are some headstones which can be found partly buried by the Surrey Quays Road gate.
King George’s Field is managed by Southwark Council and protected by Fields in Trust.

Information about the lost church at: Rotherhithe Blog and a photo on eBay.

This section lists the subjects commemorated on the memorial on this page:
King George's Field - SE16 - unicorn

This section lists the subjects who helped to create/erect the memorial on this page:
King George's Field - SE16 - unicorn

This section lists the other memorials at the same location as the memorial on this page:
King George's Field - SE16 - unicorn

This building was the Head Office and branch of the Catholic Building Society...

From Russia Beyond the Headlines:"Brodsky's annual visits to Apartment 2, 20 ...

Not a memorial but a celebration of the local people, pictures of this artwor...