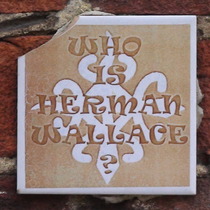 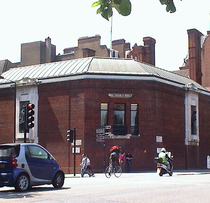 This tile is about 4" square. It has been guerrilla-stuck to the wall just above the white 1911 City of Westminster mile marker, which can be seen to the far right of our photo, taken many years ago, before the tile appeared. Google and you will see that similar tiles have appeared at other locations around London.

Ornamental Passions's post had good photos of the statues. Apparently cabbies call this "hot and cold corner" (think about it). The room behind is the lecture hall.

This section lists the subjects commemorated on the memorial on this page:
Herman Wallace

In 1972 a prison guard was murdered in Angola Prison, Louisiana, USA, where H...

This section lists the other memorials at the same location as the memorial on this page:
Herman Wallace

This kiln is a reminder of the 19th century when potteries and brickfields we...

In the courtyard at the rear of this building is The George - London's only g...