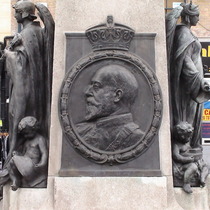 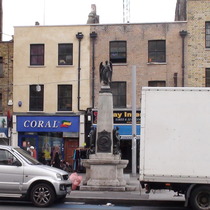 {Above each basin is a cherubic water-spout with a word carved into the stone:}
Justice
Liberty

This granite obelisk is crowned with a winged angel and flanked by statues of Liberty and Justice. Our picture shows the south, road-facing, side. On the north side there is a similar crowned roundel but instead of a portrait relief bust it carries the inscription. We'd read that, due to repeated theft, the bronze inscription plaque had been replaced with a plastic one. We went back and checked - rapped with our knuckles and everything metal-looking was also metal-sounding. Speel has a good assessment of the artistic quality of the sculptural work.

PMSA says that this was unveiled, by Charles Rothschild in 1911, and also that it was unveiled on 15 March 1912. Initially we thought that perhaps Rothschild made a very long speech, but the 1911 probably comes from the inscription, whereas the 1912 date was probably the date of the actual ceremony. Another problem is the Rothschild, since British Pathe name Leopold de Rothschild rather than Charles and with their hats on it's impossible to say. Perhaps they were both there.

The PMSA confirms the sculptor as Frith, though elsewhere we've read 'Henry Poole', whose statue of the King is in Bristol.

This section lists the subjects commemorated on the memorial on this page:
King Edward VII fountain

This section lists the subjects who helped to create/erect the memorial on this page:
King Edward VII fountain

This is the only fountain/trough in Tower Hamlets on the mdfcta site.

{On the southern end:} In memory of Charles Kingsley {On the side:} Metropol...

Presented to the Hackney Borough Council by Morris Nelson Esqre. in memory of...

The medallion was sculpted in 1886.  Chelsea says: "It appears to be based on...