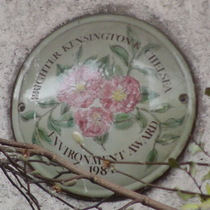 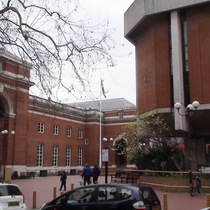 OK, not a memorial, but a pretty plaque that we could not resist (nor photograph very well - sorry.) The Brighter Kensington and Chelsea Scheme was founded in 1953.

The library, by E. Vincent Harris and opened in 1960, is the building to the south, the left of our picture. The Library Time Machine must be based in this building so, as you'd expect, have a very thorough post about it.

Chaucer is high up, on the back wall of the massive porch to the west; Caxton in the porch to the right. There is something of a tradition to commemorate on library buildings the great men of books from the past, but these two busts are of superior quality.

The other memorials are in the planted area just to the north of the library: from west to east: Princess Alice Garden - created, Princess Alice - unveiled, environmental, clock.

McMillan also produced the Lion and Unicorn sculptures which adorn the south facade and the gilded figure on the roof holding a star aloft - an exuberant lightening conductor.

This section lists the subjects who helped to create/erect the memorial on this page:
Kensington Library - Environment

This section lists the other memorials at the same location as the memorial on this page:
Kensington Library - Environment

The clock can be seen in our site picture and you'll undestand why we chose t...

Princess Alice Countess of Athlone Memorial Garden This tablet was unveiled b...

{On the top, diamond, plaque:}This tree is dedicated to PC Patrick Dunne who ...