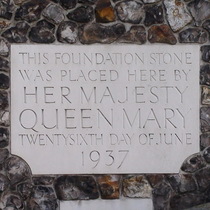 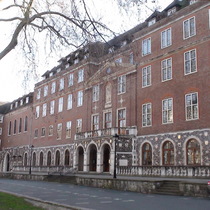 This foundation stone was placed here by Her Majesty Queen Mary, twentysixth day of June 1937.

Centre front, second floor, is a large high relief figure by Charles Wheeler, representing the Prophet of Assembly of the Church of England (though we can't discover any more about this personage, nor why it's so Eastern-looking).  And below that, some Greek text, about which our language consultant, David Hopkins, writes:

"It’s a direct quote from Luke 17:21 in the New Testament. If you have the right font on your computer it says: Η ΒΑΣΙΛΕΙΑ ΤΟΥ ΘEΟΥ ΕΝΤΟΣ ΥΜΩΝ ΕΣΤΙΝ.  In “English letters” this would be “He basileia tou theou entos humon estin”. The translation in the King James version says: “The kingdom of God is within you”, although some academics have argued that a better translation would be “The kingdom of God is in your midst”.  Neither makes much sense to me!"

Googling around suggests the carving may represent Elijah but we need help here.  Why does a building so central to the Church of England carry Greek text and an apparent Eastern religious icon so prominently?

This section lists the subjects commemorated on the memorial on this page:
Church House - foundation stone

The Westminster site was first used for Anglican church meetings and administ...

This section lists the subjects who helped to create/erect the memorial on this page:
Church House - foundation stone

This section lists the other memorials at the same location as the memorial on this page:
Church House - foundation stone

{Beneath an image of a Victoria Cross medal:}Captain Ferdinand West, Royal Ai...