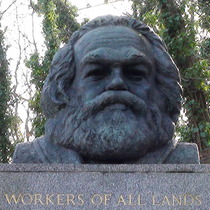 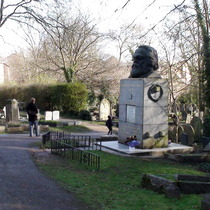 {Incised in gold letters in the granite:}
Workers of all lands unite
Karl Marx

{Incised in gold letters in the granite:}
The philosophers have only interpreted the world in various ways. The point is to change it.

As a rule we don't "do" graves but here's an exception. More a memorial than a grave this edifice has always attracted huge numbers of visitors. In 1884, on the first anniversary of Marx's death, between 5 and 6,000 people marched from Tottenham Court Road to the grave only to be turned away by police who, afraid of riots, had closed the cemetery. Marx was initially buried about 100m north but in 1956, in response to the interest in the grave, it was moved to its present location and this impressive memorial erected, funded by the British Communist Party. The original gravestone is incorporated into the plinth. A ceremony is still held here annually on the anniversary of his death, to the minute, at 2.30 pm.

Is Marx's grave a communist plot?

This section lists the subjects commemorated on the memorial on this page:
Karl Marx grave

Housekeeper for Jenny and Karl Marx.  Born Germany.  Her date of birth is als...

Wife of Karl Marx.  Born Germany.  Childhood friend of Marx, they married in ...

This section lists the subjects who helped to create/erect the memorial on this page:
Karl Marx grave

Well-head from House of Commons

This plaque is affixed to the top of the stonework of the well-head.