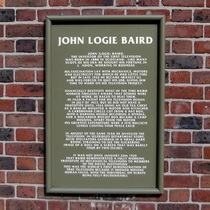 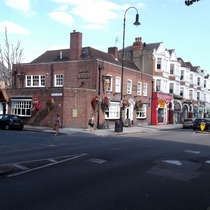 John Logie Baird
John (Logie) Baird, the inventor of the first television, was born in 1888 in Scotland. Like many Scots of his era he sought his fortune in London, working in business.
His fascination lay with mechanics, motors and electricity for which he had little time but in late 1922 he became gravely ill and was forced to quit his job, giving him time to work on his television project.
Financially destitute most of the time Baird worked tirelessly, aware that others were at work, he raced to beat them. He filed a patent for his television design in July of 1923, but he did not have a prototype until 1924 using an old tea chest as a base. He mounted a motor and attached a cardboard circle cut from a hat box, with a darning needle becoming a spindle, and a discarded biscuit box became a lamp housing. Apart from the motor his greatest expenditure were a few bullseye lenses costing four pence each.
In August of the same year he unveiled the 'television' in Selfridges department store. Avid spectators gathered in a small dark room, straining to see the flickering image of a doll on a screen that was barely four by two inches.
It was not until January 26th 1926 that Baird demonstrated a fully working prototype of mechanical television to members of the Royal Institution. This was the world's first demonstration of true television because it showed moving human faces, with the individual on screen being fully recognisable.

As far as we can discover this location has no connection with Baird, other than its (not great) proximity to Alexandra Palace where the world's first television service was inaugurated by the BBC in 1936.

This section lists the subjects commemorated on the memorial on this page:
John Logie Baird - N10

This plaque must have originally been erected on the Church Street building, ...

Unveiled on what would have been Menezes' 32nd birthday. This replaced the p...

{On the left side:}This is the site of the north east corner of "C" block, Ca...