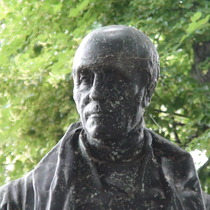 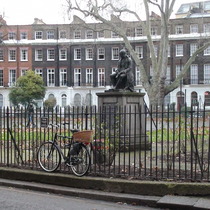 John Cartwright, born 28th Sept. 1740, died 23 Sept. 1824. The firm, consistent and persevering advocate of universal suffrage, equal representation, vote by ballot and annual parliaments. He was the first English writer who openly maintained the independence of the United States of America and although his distinguished merits as a navel officer in 1776 presented the most flattering prospects of professional advancement, yet he nobly refused to draw his sword against the rising liberties of an oppressed and struggling people. In grateful commemoration if his inflexible integrity, exalted patriotism, 'profound constitutional knowledge' and in sincere admiration of the unblemished virtues of his private life this statue was erected by public subscription near the spot where he closed us useful and meritorious career.

Cartwright lived nearby at 37 Burton Crescent, now the curved section of Cartwright Gardens.

Christmas 2016: These gardens were permanently opened to the public, after 200 years of being private space. This came as a side benefit of the massive redevelopment of the east side of the gardens for student accommodation. Our photo shows the statue as it was in 2012.

This section lists the subjects commemorated on the memorial on this page:
John Cartwright

This section lists the subjects who helped to create/erect the memorial on this page:
John Cartwright