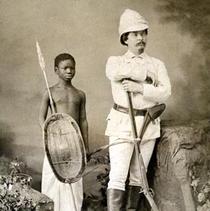 Given his role in the American civil war, his association with King Leopold and his time in Africa it is not surprising that he has been accused of racism. Of course we are judging with current standards, and reports from the time differ but if some of them are true the general view of Stanley as a brave hero needs adjusting.

2021: The residents of Denbigh voted on the possible removal of Stanley's statue from Hall Square where it was placed only about 10 years ago. And overwhelming support means it will remain.