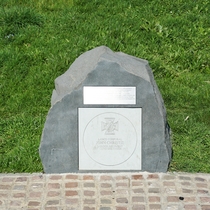 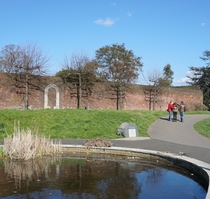 {On the small plaque:}
John Alexander Christie was born in Warwick Road, Edmonton in 1895 and was a recipient of the highest award for bravery, the Victoria Cross, whilst serving as a soldier in World War I. On the 21st/ 22nd December 1917 at Fejja, Palestine, Lance-Corporal Christie of the London Regiment (Finsbury Rifles) successfully defended a captured position from enemy attack. Christie took a supply of bombs and proceeded alone along the communication trench and bombed the enemy. Though encountering heavy opposition, he bravely continued until the attack had stopped. His prompt action saved many lives.

{On the large plaque, below a representation of the Victoria Cross:} Lance Corporal John Christie London Regiment 21st - 22nd December 1917.

This section lists the subjects commemorated on the memorial on this page:
John Alexander Christie - Edmonton

Soldier. He fought at Gallipoli, and then at Fejja in Palestine. After his po...

{Inscription in the steel panel at the front of the memorial:}Harrow honours ...

The first memorial was obviously sinking into the ground when our...