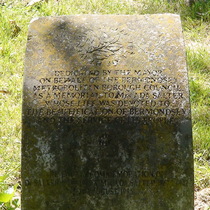 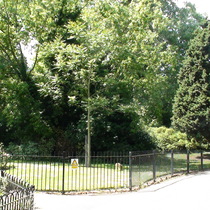 {Around the incised leaves:}
Ada Salter Tree of Heaven

Dedicated by the mayor on behalf of the Bermondsey Metropolitan Borough Council as a memorial to Mrs Ada Salter whose life was devoted to the beautification of Bermondsey and the service of its people.

The inscription's date of birth for Ada contradicts that of reputable sources, by one year.

Despite the "relaid" this is clearly not the original 1943 wall plaque, dedicated by Starr. We hunted for that "at the back of the once roofed rose-covered central pergola" but could not find it so have to assume it lost.

An information board in the southern corner of the garden provides:
Southwark Park - The Ada Salter Garden (1936)
Born in Rauds, Northamptonshire in 1867, Ada Brown moved to the Capital to join the West London Mission. In 1897 she transferred to the Bermondsey Settlement in Farncombe Street to run a Girls' Club where she met and later married Dr. Alfred Salter in 1900.
Living above Dr Salter's Surgery on the corner of Keeton's Road and Jamaica Road, the couple set about their programme of far reaching social reform.
Largely overshadowed by Alfred, a local councillor and later MP for West Bermondsey, Ada too followed a political career, becoming one of the country's first women councillors in 1909, and Britain's first woman Labour mayor in 1922.
By the early 1930s, the Bermondsey Beautification Committee (started the previous decade by the Salters) had made an impact; hundreds of trees now lined the streets of Bermondsey and small plots of once derelict land were a rainbow of colour. However there was one place, although very green, that was lacking in colour - Southwark Park, which was owned and administered by the London County Council (LCC).
After many years of petitioning the LCC, it took a change of power in 1934 to obtain the funding necessary for Ada's "pet project", an Old English Garden. Created by Col. J. J. Sexby, Superintendent of LCCs Parks, the garden was opened in the autumn of 1936; unfortunately Ada was too ill to attend this opening.
Ada Salter died on December 5th 1942. In July 1943 the LCC decided that the garden should be renamed The Ada Salter Garden. A wall plaque placed at the back of the once roofed rose-covered central pergola read "This garden is named after Mrs Ada Salter, a member of the Parks Committee of the LCC from 1925 to 1941, in commemoration of her devoted service to the people of Bermondsey".
Bermondsey Borough Council also paid tribute to Ada's life and work by planting a Tree of Heaven (Ailanthus Glandulosa); this was her favourite tree and had a symbolic meaning to her Quaker beliefs. This tree and memorial stone can still be seen today close by the eastern entrance to the garden. Many of the plants were replaced as part of the Lottery project 2001/2 Funding from the HLF.

This section lists the subjects commemorated on the memorial on this page:
Ada Salter Garden - tree

This section lists the subjects who helped to create/erect the memorial on this page:
Ada Salter Garden - tree

This granite stone was recovered from Culloden Moor, site of the battle. We v...

The first memorial was obviously sinking into the ground when our...

We've over-lightened the photo so you can see the indentation which used to h...