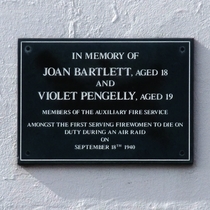 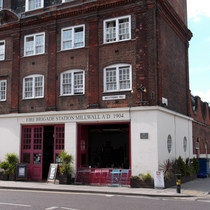 In memory of Joan Bartlett, aged 18 and Violet Pengelly, aged 19.
Members of the Auxiliary Fire Service.
Amongst the first serving firewomen to die on duty during an air raid on September 18th 1940.

The East London Advertiser has a good post about this bomb and specifies the school on which it fell as being in Saunders Ness Road. However we think it is in error in saying the school is “today’s George Green’s Secondary”. We can find no other reference to George Green's School being damaged in the war. While, also on Saunders Ness Road but three blocks to the north, is another school that fits the description, the present-day St Luke's School.

From British History: this school was then called Cubitt Town School, built in 1891, to the south-west of the Saunders Ness Road (then Wharf Road) / Seyssel Street corner. St Luke’s School transferred here from its site in Westferry Road in 1971. More details of the bombing, and photos of the ruins, of Cubitt Town School are given by Island History who also refer to the school as Saunders Ness School.

Island History have a good post about this fire station. It's not clear whether Bartlett and Pengelly ever served here, on this site, but when the building was converted into flats in 2008 they were honoured with the address 'Pengelly Apartments, Bartlett Mews'. Pengelly Photography have a photo which suggests that was when the plaque was erected.

This section lists the subjects commemorated on the memorial on this page:
Joan Bartlett and Violet Pengelly

The plaque is huge and horizontal and very difficult to photograph in its ent...