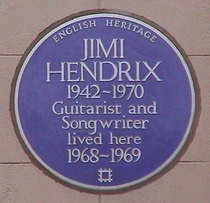 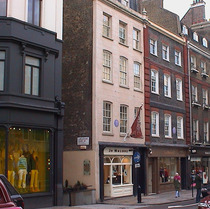 Of the two blue plaques in the site photograph this is the one on the left. Handel's plaque was originally placed rather ambiguously and many people thought that Hendrix was living in Handel's house, including Hendrix himself. He was interested to the extent of buying some Handel music and having favourites pieces. (This error was repeated again in the Observer, 26 October 2014.)

Hendrix was the first rock star awarded a blue plaque. He lived here, in a flat on the top two floors, for a short time with his girlfriend and they furnished it together, making good use of the nearby John Lewis. He said that, of all the places he had ever lived, it was the place that he most thought of as home. Many people visited, with George Harrison and Billy Preston amongst those who made use of the guest room.

The next door Handel Museum use it as offices but (in about 2008) twice a year they run tours around the flat. There is not much left from Hendrix's occupation but the tour is packed with interesting information. 2013: The Guardian reports on plans for the flat to become a proper museum. 2015: Londonist reports that it will open in February 2016.

This section lists the subjects commemorated on the memorial on this page:
Jimi Hendrix - W1

This section lists the subjects who helped to create/erect the memorial on this page:
Jimi Hendrix - W1