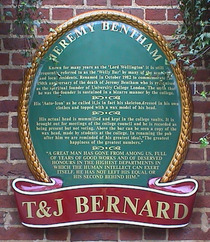 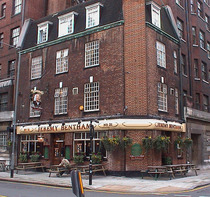 Jeremy Bentham
Known for many years as the 'Lord Wellington' it is still frequently referred to as the 'Welly Bar' by many of the academics and local residents. renamed in October 1982 to commemorate the 150th anniversary of the death of Jeremy Bentham who is recognised as the spiritual founder of University College London. The myth that he was the founder is sustained in a bizarre manner by the college.
His 'Auto Icon' as he called it, is in fact his skeleton, dressed in his own clothes and topped with a wax model of his head.
His actual head is mummified and kept in the college vaults. It is brought out for meetings of the college council and he is recorded as being present but not voting. Above the bar can be seen a copy of the wax head made by students at the college. In renaming the pub after him we are reminded of his greatest ideal, 'the greatest happiness of the greatest numbers.'
'A great man has gone from among us, full of years of good works and of deserved honours in the highest departments in which the human intellect can exert itself, he has not left his equal or his second behind him.'

This section lists the subjects commemorated on the memorial on this page:
Jeremy Bentham