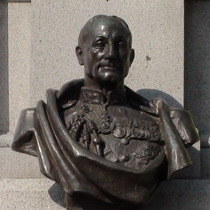 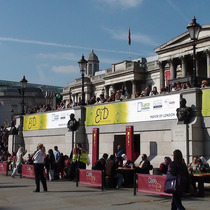 Left to right these busts are: Cunningham, Jellicoe and Beatty, that well known legal firm. (Unusually there is an error in the Margaret Baker book, Discovering London Statues and Monuments - she has the Beatty and Cunningham sculptures the wrong way round.) We thank Jamie Davis for finding this link to the British Pathe news film of the unveiling of the Beatty and Jellicoe memorials which were unveiled simultaneously on Trafalgar Day, 21 October 1948.

This section lists the subjects commemorated on the memorial on this page:
Jellicoe bust

Born Southampton. Commander of the fleet and victor at the Battle of Jutland ...

This section lists the subjects who helped to create/erect the memorial on this page:
Jellicoe bust

This section lists the other memorials at the same location as the memorial on this page:
Jellicoe bust

Above the central window, this cameo-type profile bust of the King is draped ...

Not the most flattering portrait of the old dear.