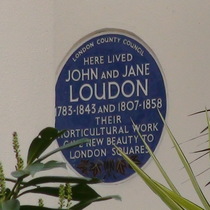 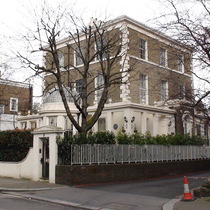 Built 1825 by John Claudius Loudon this building may not be the first semi-detached house, as discussed in the Guardian, but it is an early example and one that propagated the style. What did not get carried forward was Loudon's determination to disguise the division of the building into two residences. His design goes to great lengths to trick the viewer into thinking each home double its actual size.

You won't be surprised to learn that, in 2015 when the Guardian reported, the building was in fact in one ownership, and it was not big enough; that owner was applying to extend.

This section lists the subjects commemorated on the memorial on this page:
Jane and John Loudon

Author and pioneer of science fiction. Born near Birmingham as Jane Webb. Wr...

This section lists the subjects who helped to create/erect the memorial on this page:
Jane and John Loudon

Google Streetview enables us to say that this plaque was erected between June...