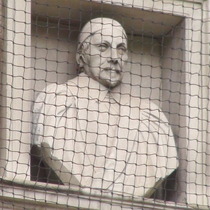 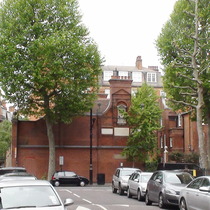 {Lower plaque, identical to that at the Hill bust:}
These buildings are the United Westminster Almshouses, erected AD 1882, following a scheme of the Charity Commissioners dated 11th July 1879 for the consolidation of the almshouses in Westminster founded by the Reverend James Palmer AD 1656, Mr Nicholas Butler AD 1675 and Mr Emery Hill AD 1708. Further particulars of this charity are inscribed upon the stone tablets above.

The plaque gives no dates for the 8 benefactors so we've only managed to identify the two Sir Crosses, and even those are a little tentative.

These Almshouses are in two blocks, quite some distance apart. The end wall of the southern block carries the Palmer bust; with the Emery Hill bust on the northern block.

While here, do have a look at the building behind the camera, a Westminster Kingsway College building on the corner of Rochester Row and Vincent Square - its 1950s decorative brickwork is much appreciated by Ornamental Passions.

This section lists the subjects commemorated on the memorial on this page:
James Palmer bust

In 1675 he founded two almshouses in Little Chapel Street near Palmer’s Passa...

He succeeded to his father's baronetcy in 1738. MP. Birth date approximate. D...