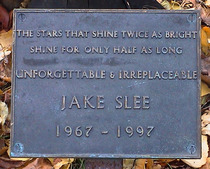 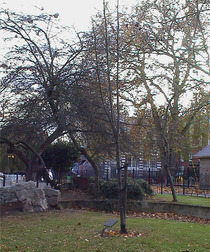 The stars that shine twice as bright shine for only half as long. Unforgettable & irreplaceable, Jake Slee, 1967 - 1997.

2013:  We are grateful to Sue Sinton Smith for this update:
This tree is a memorial to two people. Jake Slee was the original drummer with the band ‘The Crazy Pink Revolvers’ and a DJ for Kiss FM. Jake lived in Liverpool Road and when he died in 1997 his friends planted a tree as part of the Trees for London project, planting trees in disadvantaged parts of London. Jake’s mother, Janet and her husband David Austin used to visit the tree regularly and when David died in 2005 his daughter suggested he share the memorial. David was a cartoonist at the Guardian and Private Eye. Some of you may remember his comic strip ‘Hom Sap.’ The tree is looked after by some ‘guardian angels’, the homeless men who like to sit on the bench nearby. They make sure no one disrespects it.

This section lists the subjects commemorated on the memorial on this page:
Jake Slee

We dedicate this tree to the cause of peace and a world free from nuclear wea...

Hannah Gordon and Ben Kingsley both appeared in "Anne Frank: The Whole Story"...

This tree was planted in memory of those who perished in the Holocaust, 1939 ...