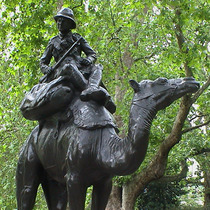 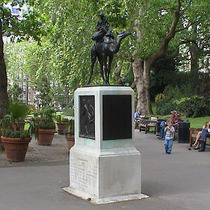 {The north face of the stone plinth is inscribed:}
To the glorious and immortal memory of the officers, NCO‘s and men of the Imperial Camel Corps, British, Australian, New Zealand, Indian, who fell in action or died of wounds and disease in Egypt, Sinai and Palestine, 1916 -1917-1918.

{Signed below the camel's right back hooves:}
A. B. Burton, Founder: Thames Ditton

The sculptor was also a member of the corps. Unveiled by Chetwode. If you like photos of camels see the View from the Mirror's post on this statue.

This section lists the subjects commemorated on the memorial on this page:
Imperial Camel Corps

This section lists the subjects who helped to create/erect the memorial on this page:
Imperial Camel Corps