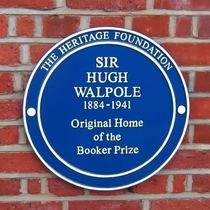 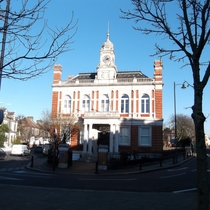 This plaque is possibly spurious. It has definitely upset the Chairman of the Wandsworth Society who says that Walpole had no known connection with the building. Although he was a founder of the Book League, (which for a while administered the Booker Prize), he died long before the prize was first awarded in the late 1960s. Also, the Book League didn't move into Book House until 1985, so it could hardly qualify as the Booker's original home. The Heritage Foundation which usually honours entertainers and sportspersons were contacted and were unaware of the plaque's erection..

Built in 1888 to accommodate the Wandsworth District Board of Works, this building was occupied for some time by the Publishing Training Centre, (which is the only explanation we've found for its present name). It has now been developed into flats.

This section lists the subjects commemorated on the memorial on this page:
Hugh Walpole

This section lists the subjects who helped to create/erect the memorial on this page:
Hugh Walpole

{On the front of the southern plinth:}The Dogs of Alcibiades, presented to th...

St Vincent's takes its name from the Brothers of St Vincent de Paul who ran a...