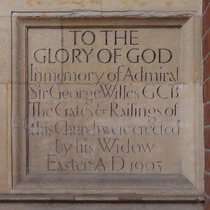 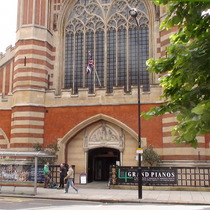 To the glory of God. In memory of Admiral Sir George Willes GCB, the gates & railings of this church were erected by his widow, Easter AD 1903.

Neither of these plaques can be seen in our photo. They are arranged symmetrically low down on either side of the entrance: Cadogan to the left and Willes to the right.

When built in 1888-90 this became the widest church in London, wider than St Paul's by 9 inches. The architect, Sedding, died suddenly in 1891 and Henry Wilson took over the completion of the interior decoration, some of which is still not finished, 2012.

Narrowly escaped demolition in the 1970s by the intervention of The Victorian Society and John Betjeman.

This section lists the subjects commemorated on the memorial on this page:
Holy Trinity Sloane Square - Willes

This section lists the subjects who helped to create/erect the memorial on this page:
Holy Trinity Sloane Square - Willes

This section lists the other memorials at the same location as the memorial on this page:
Holy Trinity Sloane Square - Willes

OK, not a memorial, but a pretty plaque that we could not resist (nor photogr...