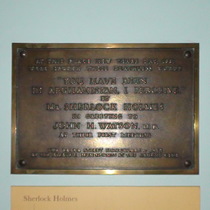 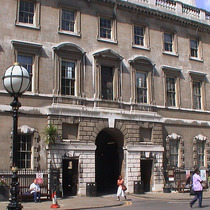 At this place New Years Day, 1881 were spoken these deathless words: "You have been in Afghanistan, I perceive." by Mr. Sherlock Holmes in greeting to John H. Watson, MD. at their first meeting.
The Baker Street Irregulars - 1953 by the Amateur Mendicants at the Caucus Club.

The incident commemorated takes place in the first Sherlock Holmes story "A Study in Scarlett" published in 1887. See the plaque at the Criterion for what led up to this meeting.

This plaque is displayed in Barts Hospital Museum and was brought to our attention by Londonist.

The information panel under the plaque gives: "'You have been in Afghanistan, I perceive'. These immortal, but fictional, words signify the beginning of the partnership between Dr John H. Watson, MD, and the world famous detective Sherlock Holmes, in the chemical laboratory of St Bartholomew's Hospital. This plaque, which commemorates that meeting, was originally hung in the Pathology Museum Curator's room, a spot near the new non-existent chemical laboratory. ... Dr Watson had indeed been in Afghanistan, as an army surgeon, but before that he had trained at Bart's and also worked here as a house surgeon. Watson was wounded in Afghanistan and invalided back to England. He returned to London where he met a former colleague called Stamford. Watson was running short of money and mentioned to Stamford that he was seeking cheaper lodgings. Stamford told him about a man who was working in the chemical laboratory at Bart's who was looking for someone to share the nice rooms he had found. This man turned out to be Sherlock Holmes. Holmes' connection to Bart's is more obscure than that of Watson. Stamford tells Watson that Holmes is not a medical student, although he is 'well up' in anatomy and a first class chemist. Holmes might have been a private pupil or associate of the lecturer in chemistry at the Hospital."

At the Amateur Mendicants Society we learn that the plaque was previously displayed in a Medical School building but since no one got to see it there, it was moved in about 2006, to the Museum.

This section lists the subjects commemorated on the memorial on this page:
Holmes & Watson - Barts

This section lists the subjects who helped to create/erect the memorial on this page:
Holmes & Watson - Barts

This section lists the other memorials at the same location as the memorial on this page:
Holmes & Watson - Barts

Beautiful filigree carved text. Compare the typeface with that at Abbaye de l...

In this court in the 18th century stood the Fountain Tavern where the politic...