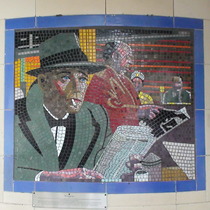 The Wrong Man, 1956
Hitchcock’s bleakly realistic account of a real-life story has Henry Fonda as New York musician Christopher Emmanuel Ballestrero mistakenly identified by the police as an armed robber.

“When I was no more than six years of age, I did something my father considered worthy of reprimand. He sent me to the local police station with a note. The officer on duty read it and locked me in a jail cell for five minutes, saying, ‘This is what we do to naughty boys.’ I have, ever since, gone to any lengths to avoid arrest and confinement. To you young people my message is – Stay out of jail!” – Alfred Hitchcock.

This section lists the subjects commemorated on the memorial on this page:
Hitchcock mosaics 16 - The Wrong Man, 1956

This section lists the other memorials at the same location as the memorial on this page:
Hitchcock mosaics 16 - The Wrong Man, 1956

The web offers up a few Anna Kists but none with the prefix Lady.

Here's what we do. You know all that money we spend on nuclear weapons and de...