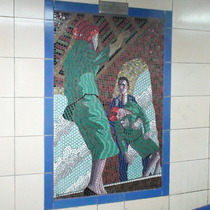 Vertigo, 1958
Tom Helmore as Gavin Elster and Kim Novak as Madeline in Hitchcock’s masterly study of love and obsession.

This section lists the subjects commemorated on the memorial on this page:
Hitchcock mosaics 15 - Vertigo, 1958

This section lists the other memorials at the same location as the memorial on this page:
Hitchcock mosaics 15 - Vertigo, 1958