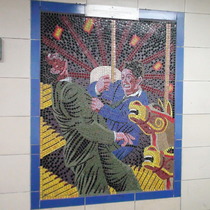 Based on a novel by Patricia Highsmith and co-scripted by Raymond Chandler, this is the story of the psychotic Bruno, brilliantly played by Robert Walker, who suggests exchanging murder victims with Guy, played by Farley Granger, a stranger that happens by chance to share the same train.

Bruno (Robert Walker): “Some people are better off dead – like your wife and my father, for instance.”

This section lists the subjects commemorated on the memorial on this page:
Hitchcock mosaics 12 - Strangers On a Train, 1951

This section lists the other memorials at the same location as the memorial on this page:
Hitchcock mosaics 12 - Strangers On a Train, 1951