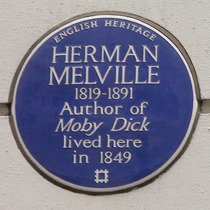 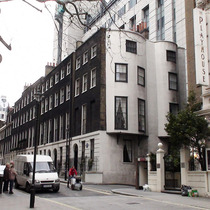 Herman Melville stayed at number 25 for two months in 1849.

2021: This house is available to rent (£19,500 a month, since you ask). Mansion Global says: "... it’s where he began writing ... “Moby Dick,” a book considered “the greatest novel in American literature.” The author was an “indefatigable partygoer and sightseer,” during his time in the capital, according to English Heritage, which runs the Blue Plaque scheme. “In his diary, he recorded seeing the Lord Mayor’s Show, a public hanging, the British Museum, the National Gallery and London Zoo,”  ... it was in the city that Melville saw J. M. W. Turner’s whaling pictures for the first time, providing visual inspiration for his new book, according to listing agency Dexters."

This section lists the subjects commemorated on the memorial on this page:
Herman Melville

Novelist. Born New York City as Herman Melvill. After 7 years as a seaman on ...

This section lists the subjects who helped to create/erect the memorial on this page:
Herman Melville

Site of the Parsonage of St Nicholas Acons where scientific life assurance be...