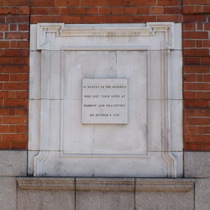 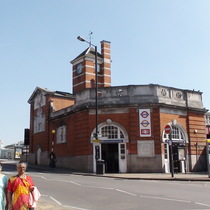 In memory of the 112 people who lost their lives at Harrow and Wealdstone on October 8 1952.

Unveiled by the mayor of Harrow, Councillor John Branch, to mark the 50th anniversary of the crash.

Inside the station are two other plaques which we've transcribed but they are too dull to warrant the full treatment:
Dull plaque 1: This plaque was unveiled by Tony McNulty, Parliamentary Under Secretary of State for Transport and MP for Harrow East on Friday 11th July 2003 to commemorate the refurbishment of Harrow & Wealstone station through an innovative partnership between Silverlink, Network Rail, The Railway Heritage Trust, English Heritage and The London Borough of Harrow.
Dull plaque 2: The London Underground Award presented to Railtrack Midlands for Harrow & Wealdstone Station by Her Royal Highness the Princess Royal. National Railway Heritage Awards.

This section lists the subjects commemorated on the memorial on this page:
Harrow rail crash

A rare three-train crash which resulted in the death of 112 people and more t...

This section lists the other memorials at the same location as the memorial on this page:
Harrow rail crash

These almshouses were erected in the year 1860 for poor inhabitants of the li...

Site of the old Fox and Crown. {Above the main plaque is a monogram and a dat...