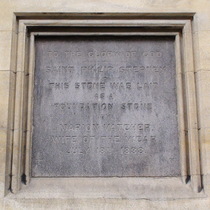 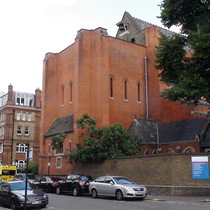 To the glory of God. St Philip, Stepney. This stone was laid as a foundation stone by Marion Vatcher, wife of the Vicar, July 18th, 1888.

AIM 25 gives the history of this church:

Saint Philip's originated in a proprietary chapel built by local residents between 1817 and 1821, within the parish of Saint Dunstan's. .... the chapel {was} legally conveyed to the Commissioners to become a parish church. The church was consecrated in 1823 and assigned a district in 1836. By 1883 the new vicar found the building in a disastrous and disgraceful state of dilapidation. A new church was built and was consecrated on October 12 1892. After the Second World War, the parishes of Saint Augustine and Saint Philip were united and the church was then known as Saint Augustine with Saint Philip. It was declared redundant in 1979 and united with Saint Dunstans and All Saints, Stepney. The building is now used as the library of the London Hospital.

This section lists the subjects who helped to create/erect the memorial on this page:
St Philip's Stepney

Marion was the wife of Sidney Vatcher, the vicar of St Philip, Stepney in 18...