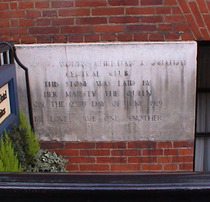 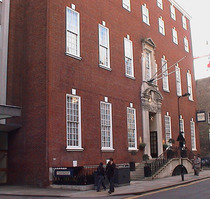 The Young Womens Christian Association Central Club
This stone was laid by Her Majesty the Queen on the 25th day of June 1929.
By love serve one another.

Building by Lutyens as the Central Club for the YWCA. This foundation stone is low down at the left of the frontage.

In 1933 only a few years after their grandmother had unveiled this plaque, the Princesses Elizabeth and her sister Margaret were taken on an unusual outing by their Governess Marion Crawford, with detectives in tow. They travelled by tube from Hyde Park Corner to Tottenham Court Road and came here to the self-service restaurant for tea.

Prior to this building there was a fairground and a brewery on this site. This building served in the war as accommodation for the services and a bomb shelter. The restaurant remained open and although bombs struck there were no casualties. Jurys Doyle Hotel Group took it on in the 1990s. Apparently the furniture is Lutyens designed.

This section lists the subjects commemorated on the memorial on this page:
YWCA

From their website: YWCA was founded in 1855 by Miss Emma Robarts and The Ho...

This section lists the subjects who helped to create/erect the memorial on this page:
YWCA

{On the left side:}This is the site of the north east corner of "A" block, Ca...